On November 5th each year, people in Britain celebrate Guy Fawkes Day with fireworks and other activities. Guy Fawkes was a British subject who was found guilty of treason in 1605 when he was discovered in the basement of the Houses of Parliament with barrels of gunpowder. He was prosecuted for treason, found guilty, and sentenced to death. 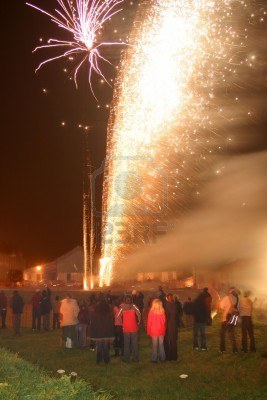 Pic of Guy Fawkes Day celebration. You can clearly see that this is not in July.

Since we could not celebrate Independence Day on July 4th, we all would pretend to celebrate Guy Fawkes Day on November 5th. We knew in our hearts that we were, actually, celebrating our independence from British rule.

When my family returned to the U.S. after three years, it was such a relief to celebrate on July 4th again.

Now, this is more like it.
Happy July 4th Independence Day!

I work as administrative support in the Oklahoma State University Art Dept. For the past few years, I have been responsible for finances, paperwork, and other decisions for my parents who lived in Texas. Working now to finalize everything after Father's death in 2012 and Mother's death in 2013. I also keep busy blogging, writing children's books, and occasionally shooting commercials. I live in Oklahoma, USA. I have three wonderful grandchildren. I am a teacher, writer, actor, singer. . . and whatever else I can manage.
View all posts by grandawn →
This entry was posted in eBooks, Eccentrically Eclectic and tagged America, Britain, fireworks, Guy Fawkes Day, Independence Day, July 4th, U.S. Air Force. Bookmark the permalink.